The first evidence for the existence of the port of Antwerp dates from the 12th century. Antwerp is a point of embarkment for passengers travelling to England and Zeeland, and as an export port for wine from Germany to England.

Industrial products such as wool and cloth created more commerce in the city. Great storm floods made the Scheldt more accessible, enabling shipping traffic to flourish. The 16th century has gone down in history as Antwerp’s Golden Age.

The port benefited from the flourishing export of goods produced in the South Netherlands provinces. Via Antwerp, these products, including art, found their way to France, Spain, Portugal and Morocco. Halfway the sixteenth century, ten jetties and eight inland ports were built to facilitate this growth. When Antwerp fell into Spanish hands in 1585 and there was a blockade on the Scheldt, the city went from commercial world centre to an inland port for two centuries. 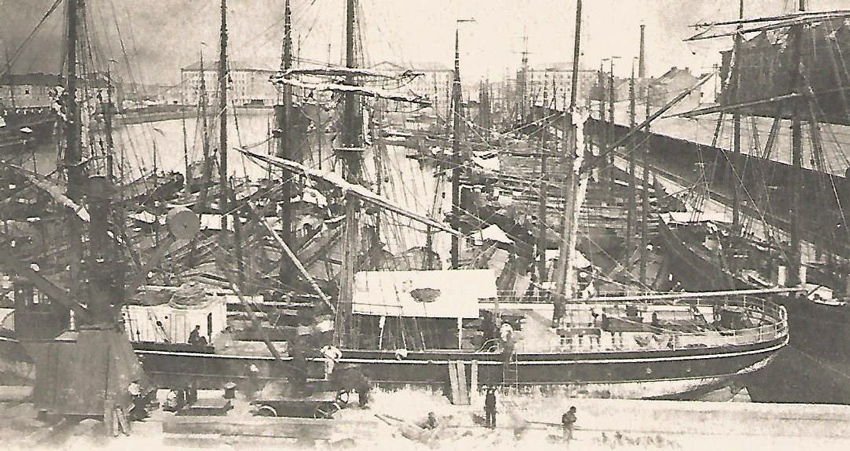 Antwerp's potential was recognized by Napoleon Bonaparte and he ordered the construction of Antwerp's first lock and dock in 1811. Called the Bonaparte Dock, it was joined by a second dock - called the Willem Dock after the Dutch King - in 1813. When the Belgian revolution broke out in 1830, there was a well-founded fear that the Dutch would blockade the Scheldt again but, in the event, they contented themselves with levying a stiff toll. The Belgian government was able to redeem the Dutch Toll in 1863.

Locks connect the historic and the right-bank harbour complex with the tidal Schelde River: the first, the Kattendijk, was opened in 1860 - when negociations to re-open the Scheldt for traffic were still going on. In the mean time the connection with the hinterland was further developed. The so-called ‘Iron Rhine Railway’ to the Ruhr was opened  in 1879.
In 1988, when the 1,640-foot (500-metre) Berendrecht lock was opened, it was the largest lock in the world.

From the end of the 1860s and in the 1870s the Antwerp port rapidly developed. When in 1869 the Pacific Railway between Boston and San Francisco was opened grain could easily and rapidly been transported from the Western states to harbours on the US East Coast, and from there by ships to Europe. In 1875 for the first time Argentinian grain arrived on the continent. Between 1860 and 1876 the import of corn and grain to Belgium rose from 108,565,885 kg tot 453,808,651 kg. Antwerp became the main grain import harbour in Europe: in 1900 almost half of the transfer consisted of grain.

In 1861, two years after the first oil well was drilled by colonel Drake in the American Petroleum Company imported the first barrelsto Antwerp. They arrived and were stocked in the America Dock - where a great fire destroyed 58,000 barrels in 1889. As a result - and to prevent fire hazard - authorities decided to move and concentrate all petrol-linked activities to a new harbour area upstream the Scheldt, to the south of the city. In the polder, on the border between Antwerpen and Hoboken, one started in 1900 with the construction of a complete new petrol harbour complex.  In 1902-1903 a reinforced concrete jetty was built where modern tankers could moor. The first buildings and petrol tanks were ready in 1904 - but on August 26th 1904 a great fire broke out. Fire precaution became even more imminent after this incident. A decade later, the Antwerp petrol harbour (‘Petroleum Zuid’, Petrol South) had developed into the main petrol harbour of Europe. But the First War, the confiscation of the Belgian interests in petroleum extraction in Eastern Europe (e.g. in  Chechnya and Romania) after the Russian Revolution, and the fact that Belgium had no petrol producing colonies, slowed down the development. While petrol trade moved north to Rotterdam and to other ports in Europe, Antwerp however developed its petrochemical sector and today the city and its harbour represent the most important petrochemical cluster in Europe, where all major companies are represented. The top 10 of the biggest chemical producers in the world are present in Antwerp, either with their supply chain or with a production unit.
The old petrol harbour, with its heavy polluted soil, is now going to be redeveloped into a new ecological industrial and business park "Blue Gate". Most of the old installations had been demolished when petrol industry, since the end of the 1970s, left the area - but recently some of the last landmarks have been protected as historic buildings and will be integrated in the new master plan.

Many sites in the port of Antwerpen now have been scheduled as historic monuments.
These include the old dry docks, bridges, warehouses, quays, etc.
The former St Felix warehouse has been re-used to house the city archives. The Bonaparte-dock, next to the MAS-museum, is now a museum dock where not only the barges owned by the non profit association 'Rijn- en Binnenvaartmuseum' are moored, but also a lightship, a floating crane
The dry docks and its pumping station are planned to become a centre for maritime history and heritage. The restoration of the protected Mexico-bridges (1936-1941) recently started