under construction - send us your comments and amendments
<< back to start

As defined during the 2018 European Year of Cultural Heritage, heritage as such comes in many shapes and forms.

'Railway heritage' is thus more than an old railway station or locomotive, and should be considered in a holistic way

is everything that makes the train and tram run: the track, the engineering structures, the signalling and the buildings.

1.1. Lines in the landscape
Railways drew new lines through the landscape, often recognizable from the air - and even from the ground - decades after the trains stopped running.
The rails were first made of cast iron, later of iron and steel. Where there was a need to change direction, there were points. Large areas were occupied by marshalling yards and goods stations. Because steam locomotives had to be turned around in order not to have to go backwards, railway triangles were built.
During the second half of last century more and more lines were abolished. The motorways, passenger cars, buses and trucks pushed railways and trams into the defense.
Old and neglected tracks still draw lines through the landscape (now sometimes greenways for walkers and cyclists). Alongside these remaining railway architecture was here and there transformed into tourist infrastructure, a pub or a restaurant, even in some places a B&B,...

1.2. Buildings
Railway architecture encompasses a wide range of types of buildings and structures, many of which were conceived to meet the needs of the new railways.
First and foremost, there are the stations, the freight stations, the locomotive and tram depots, the maintenance workshops, the guardhouses at the level crossings and the signal boxes. 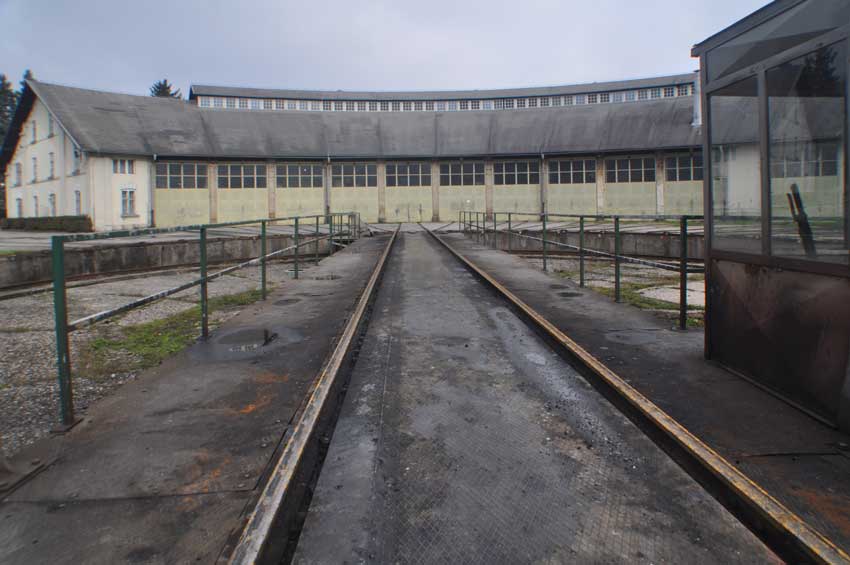 From the 19th century onwards, the railway station became the place from which towns and villages came into contact with the outside world. From then on, kings and presidents were received in stations, no longer on the border of the municipality.
Every style and material is represented in their architecture. This heritage is still growing. Whereas originally the focus was on the achievements of the 19th and early 20th centuries, today more and more buildings and constructions from after the Second World War are also considered valuable.
However, on the initiative of the railway companies, many other buildings have also been erected, from offices and administrative buildings to homes - sometimes entire neighbourhoods - for railway workers.
Many large and impressive metropolitan stations have since been restored for their prestige. Some smaller old stations, where trains no longer stop or where services are provided remotely using modern and digital techniques, have been given a new function. They now can be from homes to pubs, tourist services and even offices of architects and artists' studios. But even more so, they fell into disrepair. A lot of them were demolished and replaced by 'something new'. The location of the station always had and has good accessibility. Now their plot is used for shopping malls or transformed into car parks.

1.3. Centres of and for communication
Via the railways and the stations, life seeped through from elsewhere, first from the other counties and provinces, then also from across the border.  The first telephone and telegraph lines were built along the railway lines. The station also functioned as a telephone and telegraph office. Newspapers and magazines with news from elsewhere arrived and often were sold in the station.

1.4. Influence on town and country planning
The station defined a new urban order in the cities, because the station area with the station square became one of the most striking places on the outskirts of the old town. An often prestigious new 'station street' connected the old center with the station.  Around the station a typical series of buildings, hotels and inns came into being. These were the 'Hôtels de la Gare' and the 'chambres pour voyageurs' where merchants stayed for one night, conquering markets, before continuing their journey by train. They were also the 'chambres pour une nuit', the red light districts near or behind the railway stations in many main cities of bad reputation. 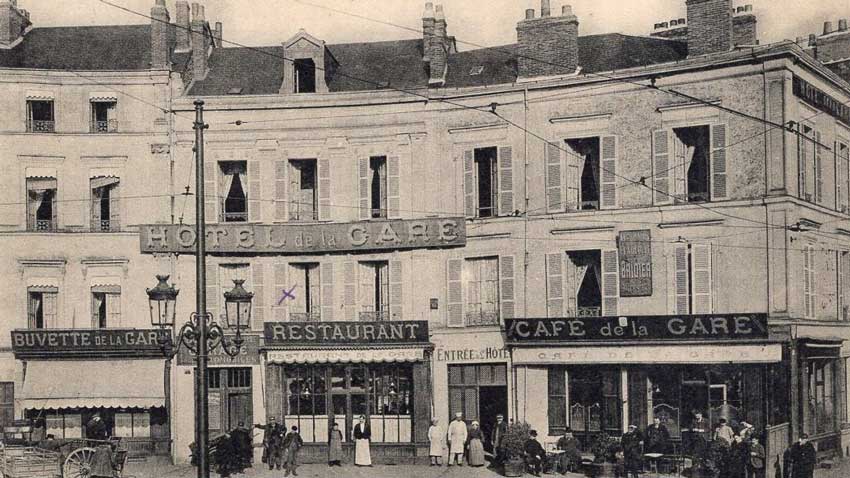 1.5. New civil and engineering constructions
In addition to the stations and their outbuildings, the railways were at the basis of new civil engineering, bridges and tunnels, viaducts and aqueducts. There are not only the impressive iron bridges over valleys and rivers, where Eiffel and followers showed their skills.
Some of these engineering highlights are internationally recognised.

But we may not forget the many small brick bridges over an important road, a brook, ... These are sometimes still orphaned in the field, because for years or decades no train or tram has passed over them - they are the landmark of an earlier era. Many bridges on abandoned tracks are in danger of disappearing due to lack of maintenance.

The delivery of locomotives and wagons was in an early stage an international phenomenon. One of the first companies to deliver to other countries was of course Stephenson, but a few years later rolling stock from Belgium, Germany, France crossed the border. As a result, you can now find rolling stock from abroad in all countries. The rolling stock, and other equipment, can therefore undoubtedly be considered an 'international' heritage. 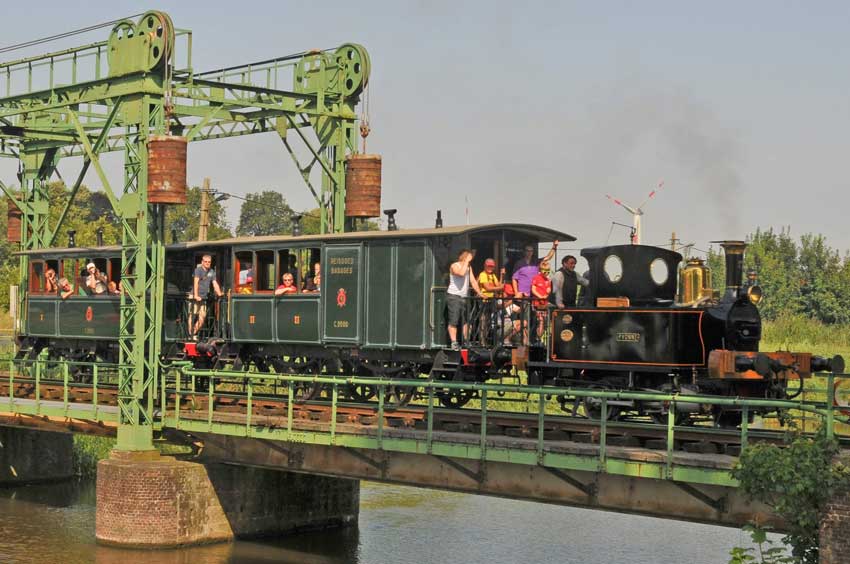 The preservation of rolling stock remains the most important aspect, or at least the best known aspect, of the protection of railway heritage. It concerns the preservation, restoration and maintenance of locomotives, carriages, freight wagons, tramways, draisines, prototypes, etc. This is done both in museums and by volunteers and associations that operate a tourist rail or tram line.
Attention is mainly paid to the transport of people (because these carriages can be used in tourist lines), less to the wagons used for the transport of goods and raw materials, the coal and ore dump wagons, the tank wagons for petroleum and chemical products, the wagons used for the transport of steel coils and car transport, the wagons used during the construction and maintenance of the lines, ...
In spite of all the efforts, it is still striking how much railway material in Europe is being destroyed or is rusting somewhere.
See the story of the 'Cemitério de Máquinas a Vapor'

But there are also the many small objects.  The old station clock, the whistle of the train guard and the uniforms of the staff, the devices to print the tickets and the pliers to cut them,.... the typical benches in the stations, the concrete closures and the evolution of traffic signals and gates at level crossing. Together with the buildings and the rolling stock, they tell the story of the lines.

If we want to preserve this heritage for the future, we must also safeguard the necessary know-how and knowledge of specific old techniques.
For example, the preservation of a steam locomotive must lead to the preservation of knowledge in the field of maintenance and operation. In order to keep a steam locomotive running, for example, they implement the specific know-how of coppersmiths or of the mechanics when repairing a firebox or the alignment of a connecting rod. Other, more everyday actions, such as lubrication, are also specific, and used to be based on feeling and experience, something that could only be transferred in practice and not through theory.
Dealing with older safety installations also requires specific skills: the operation of the levers in signal boxes and at points requires not only physical strength, but also a good knowledge of the tools. Experience is also required for the maintenance and renewal of old tracks. 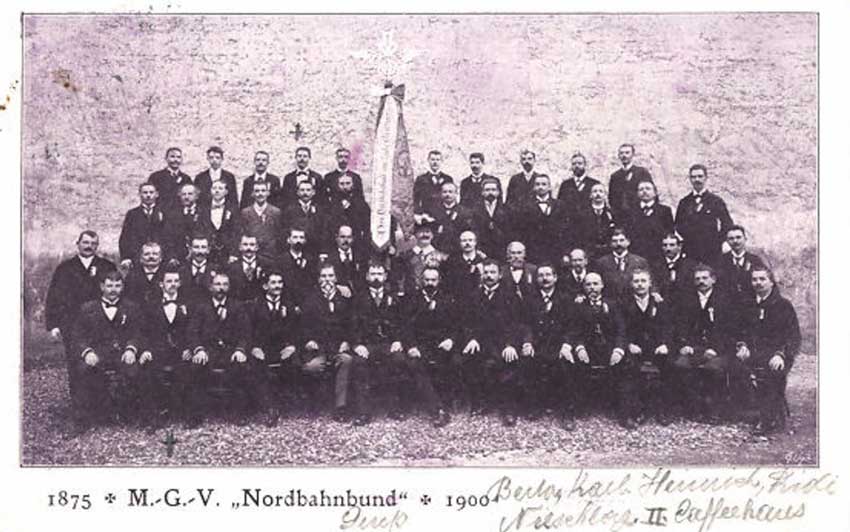 Railway history is preserved in most countries in small and large museums. and kept alive by hundreds of volunteers on heritage and tourist railways. In many places, collectors create collections of components, photographs, old documents and plans, models, model trains,...
The survival of these collections is often not certain. Sometimes they are auctioned off  by surviving relatives, sometimes they are sent to the refuse.
The larger museums depend on the financing and goodwill of governments and railway companies. In the course of times the support changed and is changing. Today the interest of the public and the number of visitors (the tourists) is often a yardstick for decisions.
The smaller and voluntary initiatives depend not only on the sustained efforts and commitment of volunteers, but also on the income they generate themselves, tickets sold to visitors for  excursions and heritage train rides, special events, souvenirs, the pub they run,.... However, many of these initiatives have been threatened by the COVID-19 pandemic. Much of the 2020 season has already been lost, and the situation is not looking too good for the next few months either. In the meantime, the maintenance, conservation and restoration of movable heritage and buildings must be guaranteed. Also all the fixed costs of insurance, energy consumption, ... remain.  In order to cover all these costs, the necessary resources are required. These have largely disappeared since the beginning of March.
In other words: for many initiatives the future is uncertain. They are an endangered heritage.

< back to first page