Since the Middle Ages flax, textiles and other crafts derived therefrom created the economic and social landscape of the region. Traditionally it was a SME region where, apart from flax, various other industrial crops were grown and processed - hops, tobacco, chicory, oilseeds,... Beer was brewed, windmills and flour mills can be seen in the landscape and along the river, while many steam engines are preserved.
The rich Ypresian clay layers were from early times used to produce bricks, tiles and potteries. From the end of the 19th century, new large and mechanized tileworks were established in the Lys valley, using large drying sheds, where the tiles dried under controlled relative humidity conditions, heated in winter by excess steam of the steam engine, air-conditioned in summer by a stream of artificial air. 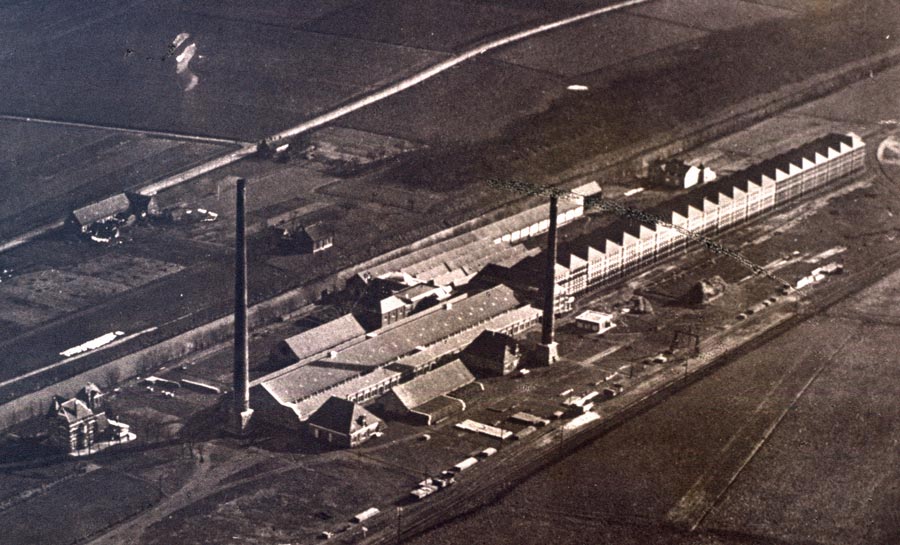 The Lys valley could and still can make use of good traffic routes and connections with France, the Lys river and its tributaries (e.g. the Deule connecting to Lille), an early network of paved roads, the Scheldt-Lys canal,...   The first cross-border railway line in the world, between Kortrijk and Tourcoing, was opened in 1843, and two years later a steam train ran on the Paris-Lille-Kortrijk-Ghent-Brussels line connecting two capitals.

During the First War, an airfield was built by the German army between the Lys and the railway line. After the war it became a military a flying school, in the Second War the German Luftwaffe made use of it. Reconquered in 1944 and used by the English Air Force, returned to the Belgian Air Force in 1946. Since 1969 it is a civil airport, where a local volunteer association has developed a small airfield museum.

It is certainly one of the most fascinating and diverse industrial regions of Flanders, where the economic and social connections with the north of France always can be felt.

Flanders became the major European centre of the linen industry since the Middle Ages till the beginning of the 19th c. - and later became the centre of flax fibre production, centralizing in the Leie (Lys) valley in South-West-Flanders.

In the first half of the 19th c. flax cultivation and the production of linen suffered from the concurrence of cheap imported cotton - which processing was easier and less labour-intensive. Flemish spinners and weavers also lost the French market after Napoleon’s defeat in Waterloo (1815) and the Dutch market after the Belgian independence (1830).
The rise of the cotton prices during the 1860s (American Civil War) caused a recovery of and new investments in the sector. The flax spinning frame, invented in 1810 by the French engineer Philippe Henri de Girard (1775 – 1845) was from then onwards introduced in all flax regions in Europe, as were numerous new tools in flax scutching, while new, easier, healthier and less smelling techniques for retting the fax were sought.

The ‘industrial revolution’ in flax fibre production (retting, breaking, scutching, hackling) took place in the South-West of Flanders between 1890 and 1914, and spread from there to other parts of Europe - after the first war especially to Normandy, Holland, Silesia, etc... The invention of the controlled warm water retting in retting tanks (not using ponds or rivers anymore, producing a better quality of white fibres) and the automatisation of the breaking and scutching on a so-called ‘flax turbine’ were due to a local inventor Constant Vansteenkiste and the discovery at the Pasteur Institute in Lille of the anaerobe bacterias which were responsible for the retting process; 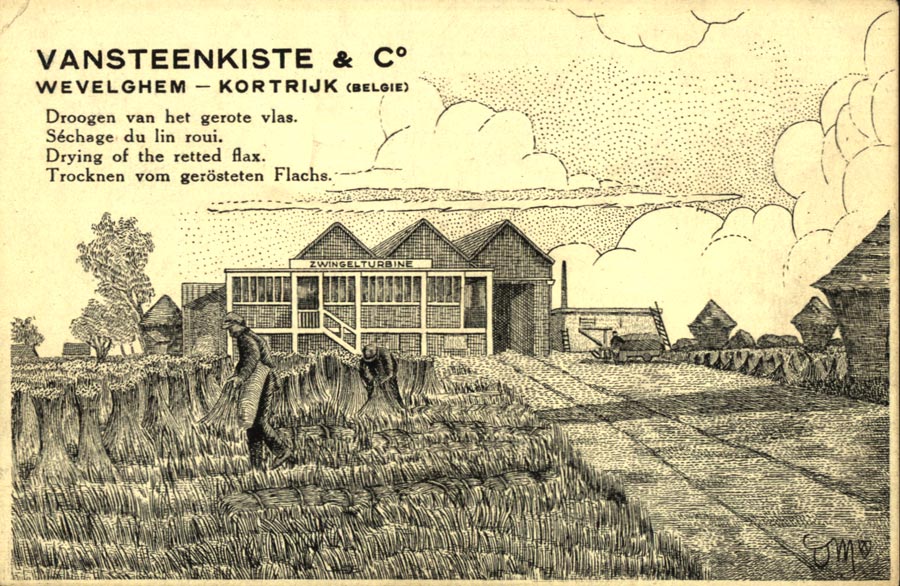 The ‘white flax’ from the Lys area, or the ‘Kortrijk Flax’ became renowned through the world. Flax from Flanders was in the 19th and early 20th century sold to spinning and weaving mills in Ireland and Italy, today most of it goes to China.

But flax is more than a plant producing fibres for spinning and weaving.
Flax is a plant of which each part is used, the Latin species name linum usitatissimum means most useful.

The flax seeds were used in the traditional medicine internally (directly soaked or as tea) and externally (as compresses or oil extracts) for treatment of disorders of the respiratory tract, eyes, infections, cold, flu, fever, rheumatism and gout.
From the seeds linseed oil is produced.
Most applications of linseed oil exploit its drying properties, e.g. as paint binder.It was first used assuch by the Flemish Primitive painters, e.g. Van Eyck for painting his Mystic Lamb (1432). It is also used to produce the traditional glazing putty (consisting of a paste of chalk powder and linseed oil), wood finish, gilding, to bind wood dust, cork particles, and related materials in the manufacture of the floor covering linoleum, etc...
Linseed oil is an edible oil in today used as nutritional supplement, but also in animal feeds and animal care products, bicycle maintenance as a thread fixative, rust inhibitor and lubricant, the maintenance of earthen floors, industrial lubricants, leather treatment, oilcloth, etc.
Fibres too short to spin were and still are used for papermaking - today dollar bills are made of it. The wooden remains of the stalk were burnt in steam boilers to drive steam engines and to produce the warm water for retting - while the ashes were used as fertiliser on the fields,...